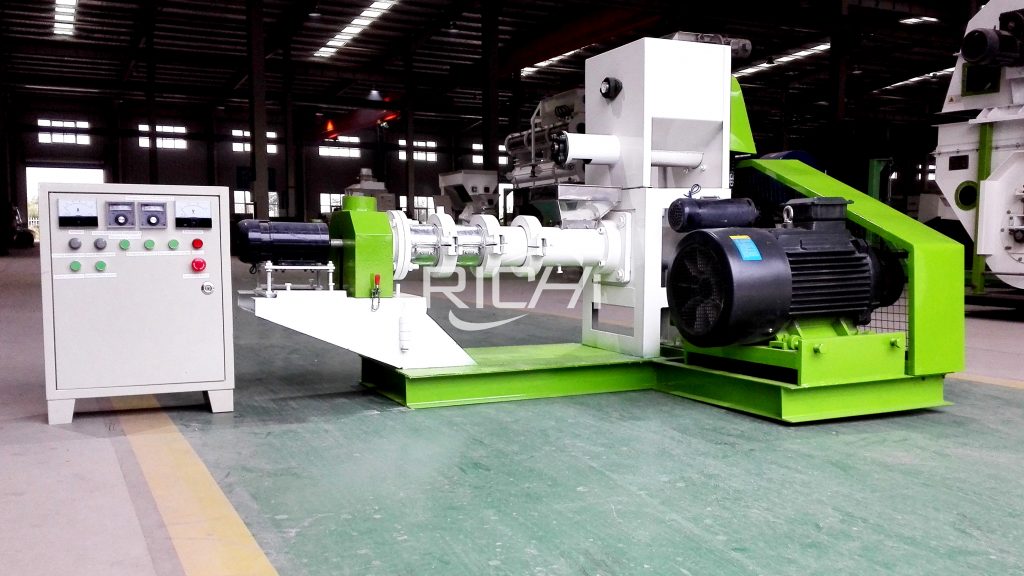 As the pressure gradually increases, the temperature increases accordingly. When the paste material is ejected from the die hole, under the action of a strong pressure difference, the material is puffed by floating fish feed making machine, dehydrated and cooled. The puffed product is loose, porous, crisp, and has good palatability and flavor.

The fish feed pellet extruder puffing process is a process that integrates various operations such as mixing, kneading, shearing, heating, and cooling. The following is a specific analysis from the aspects of density control, automatic control and energy saving and consumption reduction.

Technology is particularly important. At present, controlling the density of extruded products is mainly achieved by controlling the pressure and temperature. The main methods are as follows:

These materials are extruded by fish feed pellet extruder to the end of the extruding cavity and then compacted to obtain a heavy feed with high bulk density. This pressure relief hole can also be used to evacuate, so that the material loses part of the water vapor during the forced movement.

This fish feed pellet extruder process method realizes the control of the density of the extruded product by controlling the pressure in the extruding cavity, and the output will not be affected because the feeding amount does not need to be reduced.

The positive pressure of the cutting chamber can be realized by inputting compressed air with an air pump, and the fan can be turned off when discharging.

This fish feed pellet extruder process method avoids controlling other factors that affect the degree of expansion, thereby reducing the need for manual operation, and at the same time, the controllability is stronger than other methods.

At present, this new fish feed pellet extruder technology has not been applied in China, but this technology is superior to the exhaust method in terms of density control of extruded products and operation and use, and is a new direction for the development of extruded technology.

The automatic control of the fish feed pellet extruder extrusion process refers to the rapid and precise control of the process parameters by equipping the extrusion equipment with a computer-aided control system.

In the entire fish feed pellet extruder process, it has been developed from a single computer control system to an advanced automatic control system, which can display color images in the central control room, computer program control and communication network for floating fish feed making machine operation, it can complete all production procedures without unmanned operation.

In general, the automatic control of puffing in feed processing abroad has been developing towards the direction of combining with product quality.

While the introduction of computers in my country is mainly to solve the problem of production automation, only focusing on the monitoring of equipment operation in the production process and the control of stand-alone equipment. It has not played its due role in improving product quality and other aspects.

The problem of energy saving and consumption reduction is the research focus in the fish feed pellet extruder extrusion process.

At present, it is mainly through the research of low energy consumption processing technology and the influence of main process parameters on energy consumption, and the establishment of corresponding mathematical models to achieve the purpose of energy saving and consumption reduction.

In order to reduce the energy consumption in the fish feed pellet extruder puffing process, some domestic feed manufacturers mainly take measures from the process. For example, in the production process of suckling pig feed, the corn raw material used is not full puffed material, but part of the puffed material and part of the conventional material.

In the later fish feed pellet extruder granulation process, processes such as expansion and low temperature granulation are used to ensure that the energy consumption per unit product is reduced.

From the above analysis, it can be seen that it is still a bottleneck problem how the process parameter research in the fish feed pellet extruder puffing process can be embodied in reducing energy consumption and can be realized in actual production.

The processing temperature is high and the moisture content is large, and the material can be fully matured and degraded. The pellets are of good quality and the feed titer is high;

The adjustable range of pellet density is large, which can adapt to the requirements of various feeding objects and different feeding environments.

The important indicators of suckling pig feed are hygiene and maturation to prevent suckling pigs from diarrhea. The raw materials are treated with high temperature and high pressure, on the one hand, it kills pathogenic bacteria, on the other hand, the starch material is fully cooked, and the soybean protein is denatured and detoxified, so that the material is easy to digest and absorb. Gelatinized starch can stimulate the production of lactic acid in animals and enhance the antibacterial ability of animals.

The aquatic feedl is extruded and granulated by fish feed pellet extruder, which improves the quality of the product from all aspects.

①Improved feed titer. Extrusion ripens the starch, which is important for fish as raw starch is difficult to digest. The starch is cooked, the cohesiveness of the material is improved, and the forming effect is good. On the premise of ensuring the quality of pellets, the formula can be adjusted to reduce costs.

Experiments have shown that puffing can improve the digestion and absorption rate of feed for chickens. Extruded chicken feed, because of its small bulk density, can reduce chicken feed intake, avoid obesity, and improve egg production.

Ruminants such as cattle and sheep can convert non-protein nitrogen (such as urea) into animal protein. The key to adding urea to feed is how to control the addition amount, uniform feed intake and urea decomposition rate. Urea-expanded corn solves these problems most effectively.

The urea, corn flour and additives are mixed in a certain proportion and then enter the floating pellet machine, the corn flour is expanded, and the gelatinized starch and urea form a coating structure. Urease inhibitors inhibit the activity of urease. It inhibits the release rate of ammonia after urea decomposition from two aspects, and avoids ammonia poisoning caused by excess ammonia.

Fatty acid and rancidity, so the storage performance of fresh rice bran is extremely poor. The rancid and spoiled rice bran not only reduces the oil yield, but also affects the growth and development of livestock and poultry if fed as feed.

In addition to soybean cake (meal), the cake (meal) obtained from rapeseed, cottonseed, sunflower seed, castor and other oilseeds also contains a certain amount of protein, which is an excellent source of feed protein. However, various oil cakes (including soybean meal) cannot be directly used to formulate feed, because they all contain a certain amount of anti-nutritional factors or other harmful components.

Due to the existence of disulfide bonds and hydrogen bonds between feather polypeptide chains, the structure of feather protein is particularly stable, and animal digestive enzymes are basically unable to digest and decompose, so the feather extrusion technology has been developed.

Feather meal has high protein content, but the amino acid is not balanced enough. In order to solve this problem, chicken viscera, chicken blood and feathers can be mixed and processed into intestinal feather meal.

Fish feed pellet extruder extruding technology is a feed processing technology developed at the end of the 20th century. Pressure cutting has a good effect on controlling the density of extruded products, providing a new method for processing high-demand aquafeeds.

The use of waste steam and waste heat for conditioning makes the machine more environmentally friendly and adapts to the trend of the times. Extrusion technology of fish feed pellet extruder is widely used in aquatic, swine and ruminant feeds, which has a significant effect on changing feed quality and reducing costs.

With the development of fish feed pellet extruder extruding technology, more in-depth research is needed on how to accurately control the expansiveness and extruding quality of extruded feed, and improve the automation of extruding. 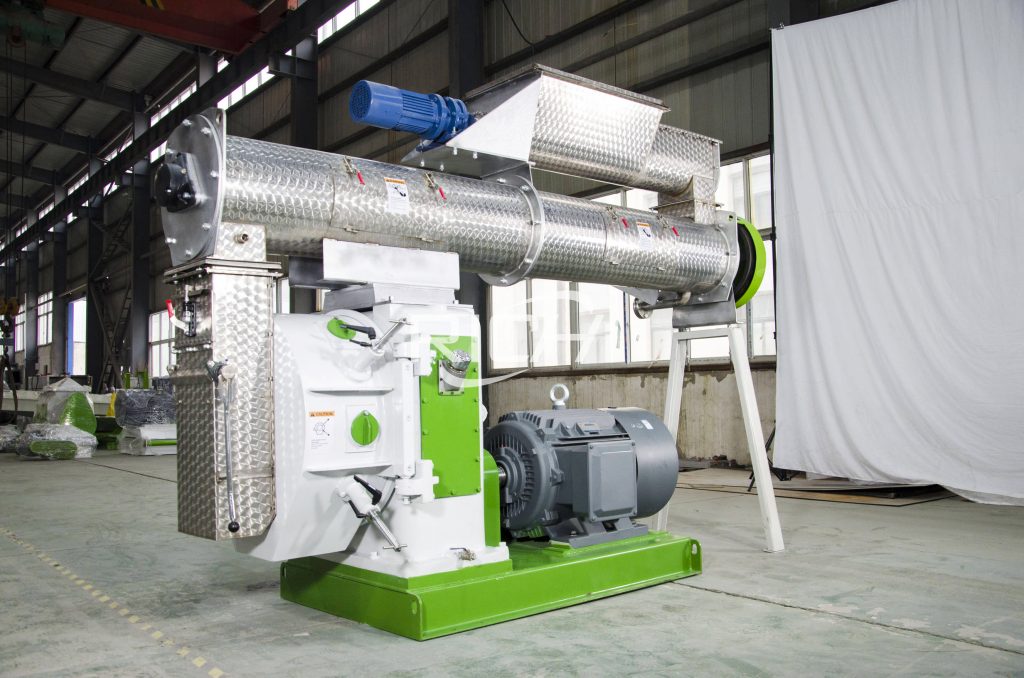 (2) Lubricating oil injected into the poultry feed pellet making machine. In the cold season, due to the low temperature, the grease of the particle feeder may solidify, making it difficult to refill the grease. Moreover, the low temperature may also cause the oil supply of the lubricating grease to be interrupted. Eventually wear is likely due to lack of oil.

Especially in winter, if there is a little mistake, the poultry feed pellet making machine will appear abnormal. Therefore, all major users must do a good job in maintenance and maintenance in winter.

What equipment is the compound feed produced?

(1) Premix: It is made by mixing 90% carrier (corn meal, bran, husk meal, etc.) and 10% additives, accounting for 0.5~5% of the complete feed. Therefore, the additive with a small amount must be mixed with the carrier first, and then mixed with other feeds to achieve uniform mixing. Although the content of this feed is not high in the complete feed, it has a great effect and the production conditions are relatively strict.

(2) Concentrated mixed feed: It is made by pre-mixing carrier, protein feed and additives. When using, the feed needs to be diluted to 5~50% as full-price compound feed. Concentrate processing plants are often built in areas where protein feed resources are concentrated.

(3) Complete compound feed: It is made by mixing energy feed and concentrated mixed feed and diluted in 2). This product can meet all stages of the growth of livestock and poultry. The full-price compound feed factory for direct processing of feed raw materials is generally established in large and medium cities or important traffic areas.

However, those poultry feed mill factories that use concentrated beverages to produce full-price beverages can also have relatively simple processes and equipment, and are mostly located in feed factories in small livestock farms.

(4) Formulated concentrated feed: It is formulated with energy feed and protein feed. It is suitable for small-scale farming in my country and is fed with silage. This type of beverage has less stringent requirements for adding trace amounts, so it can simplify the production process, reduce investment and reduce costs. In my country, feed factories are the main ones, and most of them are built near grain and oil processing factories or warehouses near small towns.

What are the cleaning methods of the feed pellet machine?

In conclusion, what cleaning method for poultry feed pellet making machine to use mainly depends on the customs and legal requirements of different countries, as well as the energy costs required to heat the water, cleaning costs and cleaning conditions.